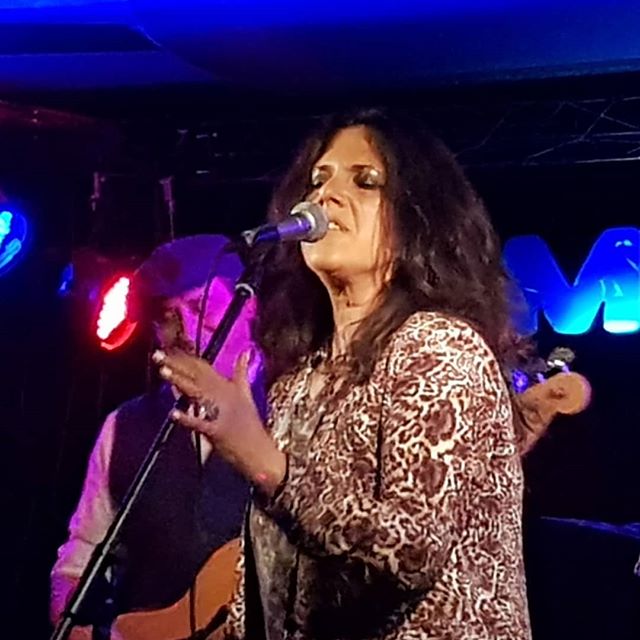 The Musician is a music venue in Leicester which has a great reputation for putting on great live music and tonight was no expectation.  The stage was set, tables with candles lit awaited the fans who had come to hear some special blues.  Kicking off the set with “New Revolution” from the new album “Never Say Never” you could tell you were in for a great night.  The camaraderie on  stage is very real, everyone looking like they were having a great time.  Sari’s vocals were  passionate and gravelly and the keys (Bob Fridzema) were beautiful. Moving effortlessly into sultry vocals, oozing with intensity and drama and wearing a lovely vintage looking jacket with skinny black jeans Sari looked every inch as though she owned the stage and was there to deliver one hell of a show.

Describing Leicester as the “world premiere of the new album and thanking the audience for being specifically chosen to hear it”  they then stormed into “King of Rock and Roll” featuring bass (Mat Beable) and guitar (Ash Wilson) that were way too cool, combining with keys and drums adding the drama.  This track is great on the album but live it delivers even more, brooding and almost menacing. I loved it!

“Thank you” followed conveying all of the hurt that you know is bubbling beneath, spiky and deliberate with a vibrant intensity.  You could tell that the band was having a blast and the audience was nodding and tapping their toes along.  “Demolition Man” was next, replete with blues swagger.  The whole band stood back to watch as the keys took over, then Ash made guitar playing look like a breeze withe some stunning, clean tones.

Sari explained that “Ain’t got no money” was written in Paris about having to really try to scrape together enough Euros for a coffee.  “Ready for Love” followed which Sari had “been wanting to cover for ages” and you could understand why as it was packed with emotion, one minute the vocals were breezy and the next they were deep and powerful.  It was a very convincing cover.   Sari  embellished it with “I just want to make love to you” which was delightful, sultry and sexy as hell, breathy vocals giving way to a deep, husky sound.

The whole evening had a real intimacy, Sari telling tales of her life and what inspired her to write the tracks.  “Kiss Me” was inspired by the 5 new born Pitbull puppies she received 12 years ago which made her think her life over, dreaming of keeping them all and moving to a farm with pigs and horses.  Instead real life took over and she kept 3 of them.  This is obviously a track which she enjoys playing as her dancing was a delight.

“Valentina” cranked the night up a few notches and the party definitely got going, infectious and cheerful  I must confess to being too busy dancing.  “Never Say Never” followed which was written by Ian MacLagan (Small Faces)  about losing his wife and letting go.  Sari told this story and also affirmed that “we need to make every day precious and make all the days count as time is not infinite.”  Slow and rich with emotion, sweet guitar tones that pull at your heart  this was great to hear live.

“Freedom” was jam packed with conviction and power.  Having thanked the audience for coming Sari then introduced their signature tune “Black Betty” which is delivered in her own style, it starts in a very controlled manner, deliberate and slow but with all the  depth hovering beneath the surface.  Wave after wave ramps up the power and boy does it deliver!  Try and see if you can find it on YouTube as you won’t be disappointed.

Sari then told the audience that they should have gone off and come back on but as she wanted to be completely honest with them and so they stayed on, to much applause and appreciation to their final song “Aunt Hazel” which left everyone feeling that they had been hit by a force of nature.

This was a great night and the talent on display was at times, breathtaking.  There was so much soul and beauty in each of the bands  performance that it made for a fantastic night, dancing  one minute and holding back the emotion in the next,.  What impressed me most was not only the quality of the songs when played  live but just how much fun everyone was having.  Go and see them while you can.