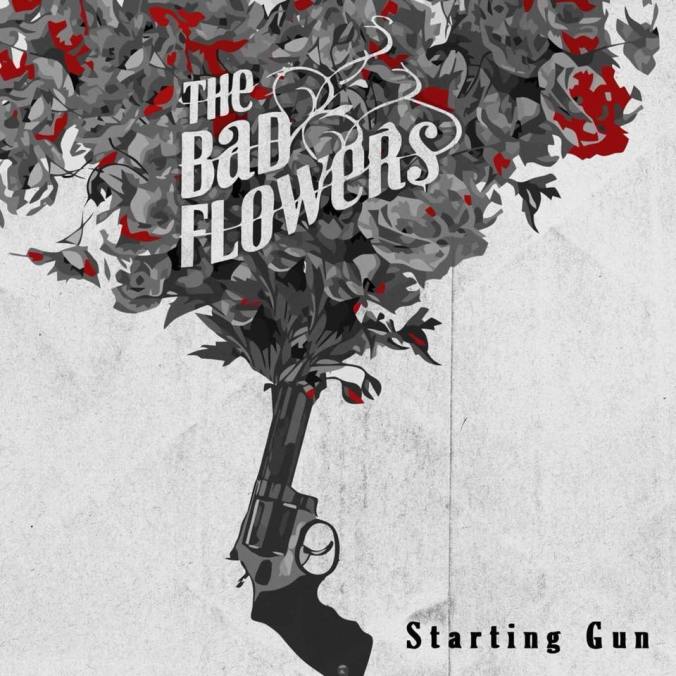 “Starting Gun” is the debut album to be released by “The Bad Flowers” on 16th February 2018.  “The Bad Flowers” are a heavy rock, blues based trio from the Midlands and are made up of Tom Leighton (guitar and vocals), Dale Tonks (bass) and Karl Selickis (drums).  “Starting Gun” is the follow up to the self-titled EP which was released in 2016 and shows the journey that this band have been on both in terms of song writing and musicianship.

To my mind there is not a bad track on this album, there is a real diversification showing just how confident and comfortable “The Bad Flowers” feel working with each other.  Be prepared, as once this album starts being played, you will simply repeat it over and over, without once getting bored.  To my mind this is the album that everyone should be talking about in 2018.

The opening track will be recognisable to anyone who listens to Planet Rock as it has been on rotation with them.  “Thunder Child” sets the tone for the album, roaring out of the starting blocks with a deep, buzzy bass line that grabs your attention combining with dramatic drumming from Karl.  The enormous riff and blistering scream from Tom will be more than enough to put a smile on your face that is going to take some knocking off and I bet will be there for the duration of “Starting Gun”.  Dale really knocks himself out with the funky bass line, providing changes in tempo and showing there is more than rock and blues to this band. 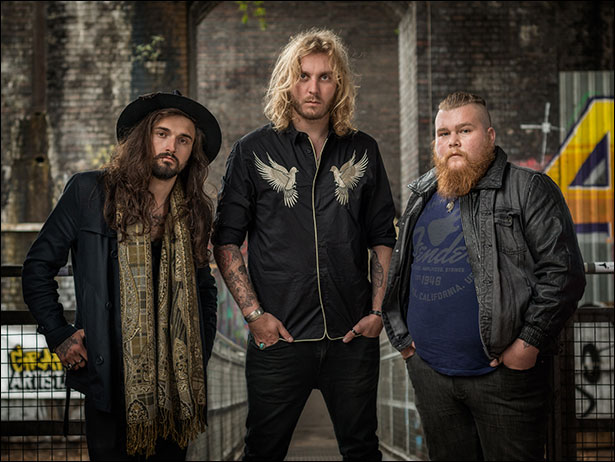 “Lion’s Blood” uses the talent of Karl and Dale to great effect.  Karl’s energetic drumming and Dale’s driving bass line are up front and full on.  The track is about being brave and not afraid of doing what you want and it seems as though “The Bad Flowers” have taken this totally to heart.  The skewed riff with the precise heartbeat of the drums beneath give a sense of coming out of confusion and into clarity.  The growling nature of Tom’s vocals fits perfectly with the snarling tone that effortlessly rise from his guitar.

Sonorous bass vibrates through your whole being, mingling with some clever drumming starts off “Secrets,” which is a bit slower than the other tracks so far.  Tom’s vocals have a sneer, driving across the airwaves and giving you a good clip round the ear.  The build up from the guitar and bass is really clever, adding texture and changes of tempo that will keep you from being complacent about what you are hearing.  If this track reminded me of anyone I would say it has elements of Rivals Sons, not that it mimics them but it uses some of the ways in which they construct tracks, allowing the melodies and instruments to play and tease each other, keeping you off balance and wanting more.

“Rich Man” has a staccato start from the drums and Tom’s vocals.  The guitar adds the lightness from singing hooks, whilst the bass is aggressive and full.  The track builds into a powerful interplay of drums, guitar and bass, each adding another element, soaring into a melee of sound.  The drums throb and build providing tension which mimics the lyrics “I am left with a broken heart and no love, I feel like the court fool.  Life of a rich mans got me poor”.  You can almost imagine the poor “Rich Man” banging the table as he cry’s out about “Wanting more”.

Then in a complete about face, we have “I Hope” which features acoustic guitar and vocals only.   Tom’s vocals are intense with emotion and the playing of the guitars conveys such sadness which echoes the lyrics.  Tom shows more of his vocal ability, moving effortlessly from breathy vocals into shattered cries of “I hope that you will be loved, like you deserve to be loved”.  It got the hairs on the back of my neck standing up and paying attention.  This is a beautiful track that I feel sure will get well deserved accolades.

There are some tracks that take your breath away from the moment the first lingering chord is played and you know that this is a special track and one that will mean something profound for you for the rest of your life.   “Let’s Misbehave” is that track for me.  If anyone sees me at a gig where “The Bad Flowers” play “Let’s Misbehave” I will be the one in tears, as it moves me that much.  Tom said that the band described this track as his “Nine Inch Nails track” as it is saturated with emotional vibrancy without ever becoming saccharine or a parody.  The drum playing by Karl seems effortless but adds strength and power.  If you want to hear a man who has been through the emotional wringer then listen to the broken heartedness in Tom’s vocals, managing to convey desperation and grit.  This track would be a fantastic track on a second or third album, but lets just remind ourselves that this is a debut album.  “Let’s Misbehave” is a pretty perfect track in my opinion.  Put it on and lose yourself in the beauty that will surround you.

Back to rock and blues we have “Who Needs A Soul” showcasing Dale’s mastery of the bass, resonant with funk and groove.  This is a track which clamours to be played live and you know that the crowd will sing the chorus back at full throttle.  Tom’s guitar provides a great balance to Dale, who is the star of this track, working his bass to maximum effect and making sure that your toes keep tapping.

“Be Your Man” is filled with clashing cymbals, heavy guitar tones, moving along at a frantic pace but with changes in tempo and drive.  Drums and bass feature prominently as you would expect by now.  Tom shows his versatility on the guitar with raspy, rising riffs.

“Hurricane” was written as a heavier track for the album and it certainly lives up to that.  The bass line adds flourishes to intrigue, whilst the drumming moves from a backdrop to the guitars to hammering the message home to ensure that everyone listening knows that this is a huge track.  Loads of fuzz, highlighted by shimmers of flamboyant guitar work wrapped up in a thumping great track.

Dale’s funky bass line kicks “I Don’t Believe It” into existence and does not let up during the entirety of this track.  Driving drumming with fierce riffs and a chorus that aches for the crowd to sing along.  It was one of the first tracks the band wrote but is bought up to date here with their new swagger and confidence.

“City Lights” is a crowd pleaser at gigs and has been remastered for “Starting Gun”.  It is filled with gigantic drumming, which changes in tempo and passion, sumptuous riffs and a bass line stuffed with drama.  This is a track that will beg your body to move (or at least your head or toes) and by the chorus you will find yourself singing along.  This is balls out rock, filled with bravado and arrogance   that epitomises the classic hard rock genre.

So there we have it, the debut album from “The Bad Flowers” who have shown with this album that they are worthy of airplay on all major radio stations and deserve to be taken notice of.  The musicianship and production of this album is really superb, with a lot of attention to detail that proves that striving for perfection does pay off. “Starting Gun” entices you in with tracks that will surprise and delight, filled with stunning riffs, dramatic drumming and magnificent bass,it is brilliant.  Go and buy a copy because if you love rock this is THE album that everyone will speak about in 2018 and beyond.

The Bad Flowers have an album launch on 17th February 2018 at The Asylum 2, Birmingham and then start at UK Tour with Stone Broken and Jared James Nichols from 22nd February 2018.

An edited version of this review was first published on @DevilsGateMedia