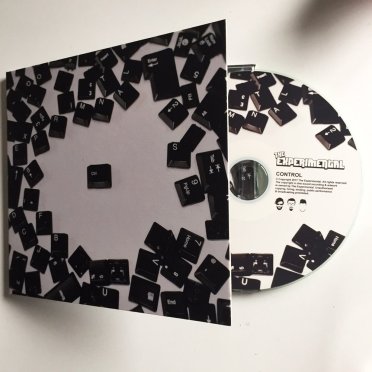 Formed in 2016 The Experimental are an indie-rock band based in the Southwest of England, made up of Joe Billingham on Bass, Darren Curnow on guitar and vocals and Chris Firrell on Drums.

The band formed after a jam session featuring Curnow and Firrell at a party the latter was hosting. Bassist Billingham was soon added and song writing began, with the band’s debut EP recorded in November 2016 with Josiah Manning at Momentum Studios in Devon.

This is The Experimental’s  EP ‘Control’ which was launched April 1st 2017.  The Experimental are currently playing shows and festivals and are due back in the recording studio now!

The band say their influences come from Radiohead, Supergrass and Elbow although they have been likened to Foo Fighters, Biffy Clyro and Muse.  There are influences of them here and whilst this is rock at its heart there would be so much that would appeal to indie and more mainstream music lovers, this is certainly a band that can cross over between the genres, widening their appeal.

The EP opens with Million Voices.  Atmospheric, cranking up into muscular riffs, this got the hairs on  the back of my neck standing up on first listen and they haven’t stopped since!  In my mind, this has everything a great track should have, blistering riffs, heavy base line, drums which add to the overall feel of the track rather than just keeping time plus great, immediately catchy lyrics that will have you singing along before the track ends.  This is the one that the crowds will sing along to and if you are lucky enough to be amongst them you will find yourself surrounded by amazing energy, bouncing along with your mates singing your head off.  This track has such a feel-good factor as it talks about standing “shoulder to shoulder” and how much more powerful we are when we act as one.

Where Did the Weekend Go has a more tongue in cheek vibe as it commands us to “stay out for just the one, two for one, down in one.”  This track has a young vibe as it is about going out and having several too many Sambucas! There are even plaintiff cries of “I’m never drinking again” as the song gets more and more frantic to the chorus.  There is a real punk sound echoing through which evidences the versatility of this band.  The riffs are distorted and off balance, which add to the feel, a bit like you would be after a mad drinking session with the band.

Starting with piercing distortion Sweet Release then morphs into a really catchy track that has underpins of heavy bass, thundering drumming and skewed riffs.  This is another track that you can visualise the crowd singing along “like a flower in a battlefield, we find our sweet release”.  This seems to be a track that talks about the battle between war and peace in all aspects of life and how you can get some peace in the confusion that is going on.  This track stirs the senses and leaves you wanting more.

Lost in Conversation with its pounding bass line that continues throughout the track, generates enough fuzz to keep everyone happy.  For me this track as a haunting quality which may be due to the bass line.  This is a song about falling in love and the walls falling down.  Again, this is a track that builds to another massive chorus.  The blissful, resonant riffs help to lift the atmosphere and lighten the darkness created by the bass.

By contrast She is the One instantly feels lighter with sparking guitar tones from the start, backed up with a chunky, distorted bass line.  The vocals have a gravelly edge to them in the chorus and almost a whispery feel in the verse, providing a great contrast which mirrors the feel of guitar and bass.  The bass line has a pounding, menacing feel about half way through the track which continues with the light guitar and keys.  This reminded me of Bruce Hornsby and provided such a juxtaposition to the first half of the track.  The production on this track, and in fact, the whole EP, is great.

This is a fab EP in my opinion, it has everything I would want from the tracks, some more haunting and technical and some sing along, feel good crowd pleasers.  To me there are hints of My Chemical Romance and Green Day but this feels like a new sound that is starting to emerge that takes the best of rock, with its enormous riffs and anthemic tracks, the best of indie with tones that make you think and wonder how they were produced and throws them into the melting pot and what comes out is simply great listening that should have mass appeal.  If this EP was playing it would instantly make you feel happy, and that is what great music does.  Spot on The Experimental, can we have some more please?  Sambuca anyone?  😊
You can find a preview of the forthcoming video release here – https://youtu.be/VsUT9FXax2w

Next single Million Voices can be downloaded from the following sites: